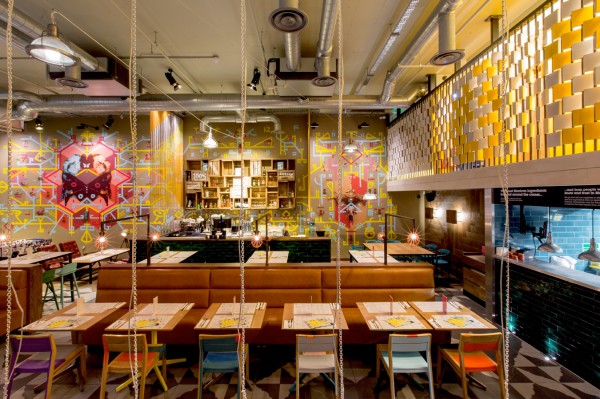 Each art project working with Wahaca becomes my favourite one and the same is the case for this one recently completed at One New Change, St. Pauls, London. The place was a blank canvas with no particular history to the site but it did allow for space to create a huge mural across the length of the space becoming the biggest mural painted for Wahaca so far!… 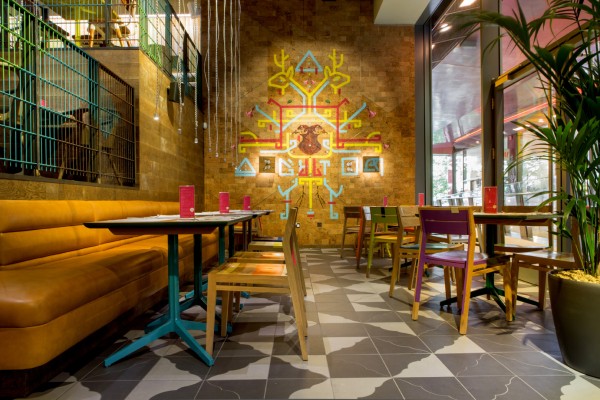 For this project I was delighted to invite two young Mexican street artists who often work together – Sanez (aka Fabian) & Kawamo (aka Sergio). Both are influenced by indigenous traditions and the rich artistic culture of Mexico. Sanez is known for his distinctive graphic painting style often using rollers to depict pre-Hispanic inspired motifs, while Cawamo produces high detailed and often politically inspired stencil art. 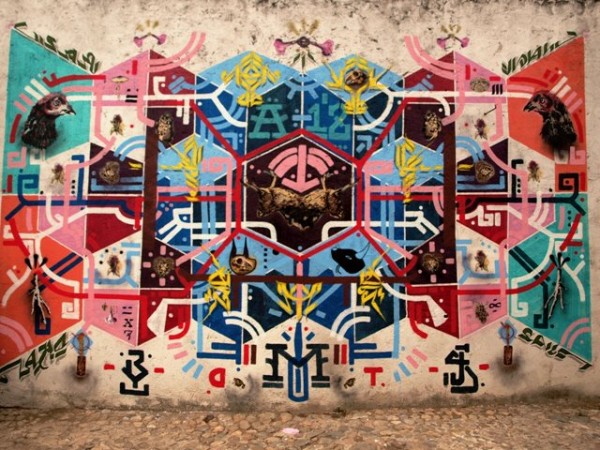 Although stylistically different, their work compliments each other while they both seek to create what they describe as, “our own national identity in our work.” Both artists have been drawn to the creative city of Oaxaca as a place to work and initiate projects. Originally from Monterrey, Fabian now lives in the city, while Cawamo spends time between Guadalajara and Oaxaca, together they team up to produce murals, exhibitions and performance pieces.

Most recently in June, 2013 they received attention for their experimental art project and exhibition “Corpus Plural” which involved working with the community of Teotitlán del Valle, a small village 31km from Oaxaca. Using installations, murals and video performance they invited local children to create a local lexicon of graphic symbols and explore ancient cosmology.

In the global world of street art Fabian & Cawamo present something authentic; they are both fascinated by their local roots and cultural identity, which they explore in original ways. In their combined murals Fabian’s bold designs create a structure using flat colour and clear outlines that have a flavour of and references to pre-Hispanic sacred art but with a contemporary interpretation. Into this geometric structure Cawamo integrates motifs for example symbolic animals, local people and folkloric activities such as shamanistic dancers. 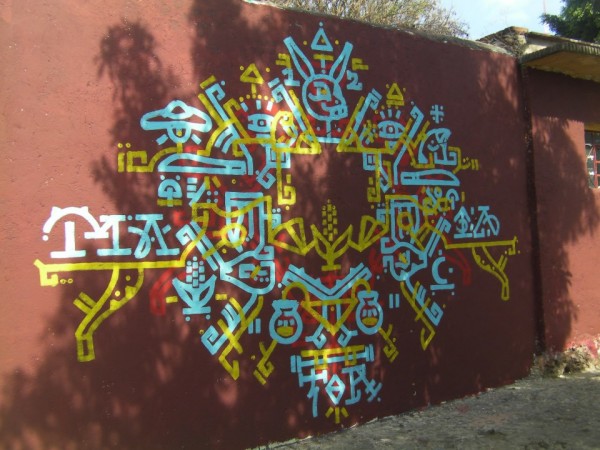 Fabian’s decorative patterns and compositions are also filled with icons such as birds; deer and other animals, all sacred symbols in Mexican folklore. But more  than simply re-interpreting icons, they feel a real affinity with, as they describe the “way pre- Hispanic cultures perceived the universe, with infinite possibilities, that’s how we see our work. Transmitting sensations rather than communicating an idea.”

Both artists have an autodidactic approach, having had no formal training, only knowledge learned from painting graffiti on the street. However they both draw from extensive personal research in folkloric art, national history and Mexican underground culture in developing their designs. Fabian is currently studying traditional printmaking techniques such as etching and lithography, in the numerous print workshops, which can be found in Oaxaca.

The following images are of the work at Wahaca in progress.. 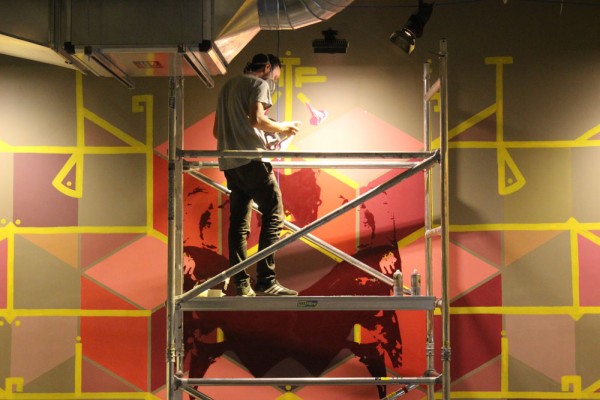