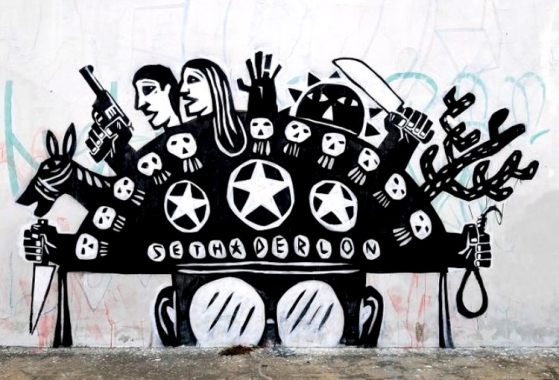 I’m taking part in this talk soon (see blurb below) looking forward to finally meeting Derlon, although I’ve been following his career this will be a first meeting!

The Embassy of Brazil in London, in collaboration with Instituto BR, proudly presents a round table discussion on Manguetown Grafitti & Brazilian Street Art. The panellists, Derlon de Almeida and Tristan Manco, will discuss Derlon´s creative process and unique style; contemporary urban art in Brazil and its ever evolving format: from marginalized grafitti to an admired and established form of expression that mixes popular culture and social awareness as well as its relevance within a worldwide street art context.

Derlon de Almeida is one of the most important names in Brazilian urban art, a self-taught artist whose artistic language includes a mix of street art, Brazilian popular culture, wood cuts (xylography) and pop art. A household name in Recife – aka Manguetown – Derlon made the city his canvas and his creations can be found on walls and buildings in Brazil and abroad with individual exhibitions and commissions in São Paulo, Rio de Janeiro, Lisbon and Amsterdam. Derlon was recently featured in the BBC 1 series Brazil with Michael Palin. Derlon’s first UK solo show From Manguetown: The Urban Art of Derlon opens on 17 July at Shoreditch´s gallery 71A. He will also be participating at Vamos! Festival in Newcastle.

Tristan Manco is a designer, illustrator and art director for clients including the BBC, Habitat and EMI Records to mention but a few. Tristan also works with international contemporary artists as well as an art director for clients including Pictures On Walls and Choque Cultural. In 2002 he published his first book, Stencil Graffiti (Thames and Hudson) which was followed by Street Logos (2004), Graffiti Brasil (2005), Street Sketchbook (2007), Street Sketchbook: Journeys (2010) and Raw + Material + Art (2012).