Posted at 16:12h in News by Tristan Manco 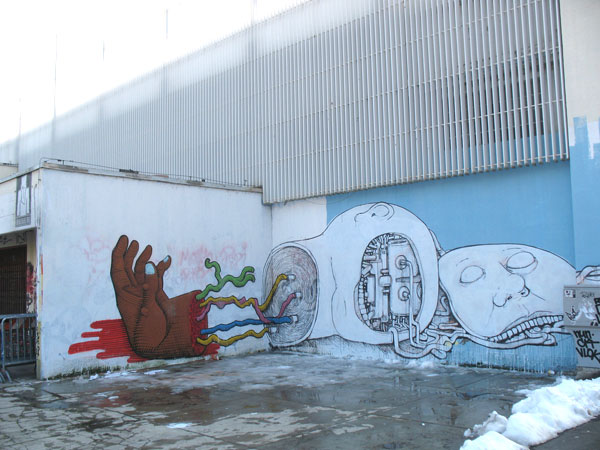 Two artists who have consistently excited me over the years are Nunca and Blu. Nunca was one of the artists we featured in Graffiti Brasil and while we were working on the book (in 2004) both myself, Caleb and Lost Art thought him the artist most likely to break through. At the time Os Gemeos, Nina, Vitche and Herbert Baglione were already known abroad, but Nunca was still young and unknown outside of Brazil. Finally in recent years, partly through the Tate Modern street art exhibition Nunca really has deservedly broken through to International recognition. Blu was one of the superstars of Street Sketchbook – it was really fantastic to see and learn about his sketchbooks for that project in 2006 – and every year since then its been a joy to watch him continue to grow as an artist.

Today I came across a collaborative street piece on Nunca’s flickr painted in Moderna, featuring both of them. I absolutely love this… Nunca’s severed hand,  a metaphor of colonial bloodshed and exploitation in society, meets Blu’s faceless robot.. the matrix has broken…