Posted at 12:38h in News by Tristan Manco 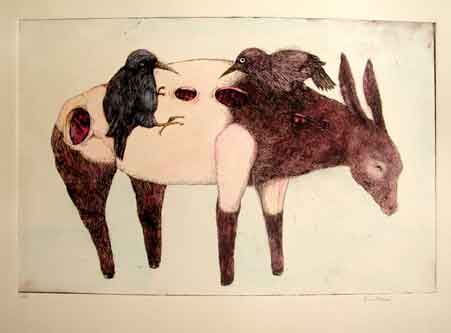 During my research for Street Sketchbook it was a pleasure to travel to Bologna last year to meet three artists whose work I love; Ericailcane, Blu and Dem. It was great to spend days there, to see the way they worked and interview them.

Modart magazine asked me to write a few words about Erica il Cane in one of their recent issues…. 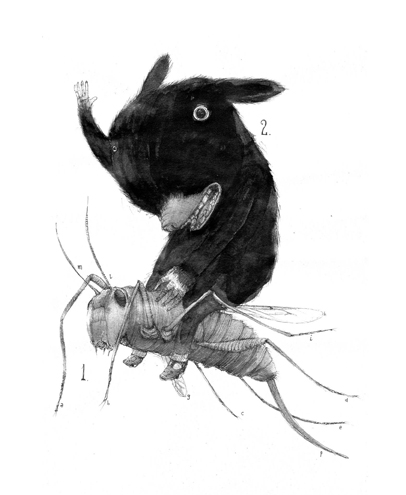 The Italians have coined some evocative nicknames for their artists; like Botticelli, which means, “little barrels”, Uccello meaning “bird” (he had a thing for painting birds apparently), and Masaccio, which means “messy”. Today we should add Erica il Cane, “Erica the dog”, to that esteemed list. Originally formed as an artists’ group, the name now refers to just one Bologna-based artist, although from his output you’d suspect he had more than one pair of hands.

Erica il Cane’s work takes on many forms, from delicate etchings to vast murals, as well as otherworldly short films created with animated models and mixed media. At a young age he was lucky enough to be introduced to printmaking by his artist father who owned a press. He produced his first etching aged 8 and has continued with the technique ever since. On a different scale he is becoming recognised worldwide for his large-scale murals and graffiti, which he often produces with fellow Bolognese artist Blu. Combining their visual ideas across the façades of entire buildings, their work is breathing new life into the art of wall painting. As if this wasn’t enough, he dedicates whole months to animation, enjoying its creative potential to combine not only drawing but light, sound, time and space.

Whatever the medium his art opens a doorway into another universe, populated with extraordinary characters – which could have escaped from the darkest corners of a fairytale book. While there are echoes of Alice in Wonderland and antique animal Illustrations in his style, his drawings are a combination of original penmanship and his personal sense of humour.

Animal figures play a starring role, sometimes portrayed anthropomorphically, depicted in human postures, wearing Victorian style clothing, and other times more naturalistically,even anatomically stripped down to bare bones and organs. In the spirit of fairytales his images often have an allegorical message for the human world; frailty, violence, greed, pride and all our sins are explored. Raised in a small town in the mountains of Northern Italy, Erica il Cane grew up respecting nature, which lead to a sensitivity towards animals and the issue of animal treatment. It’s perhaps no surprise that he is vegetarian. 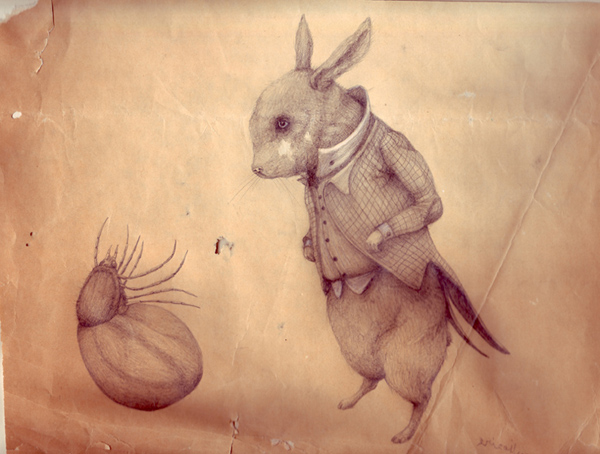